“Mr Drury stunned the audience with the Cultural Centre’s 93-stop, 8,000-pipe Austrian organ,
sometimes blasting it, sometimes cajoling it and sometimes caressing it. The result was 20 minutes of rollercoaster exhilaration.”
– Alan Yu (Review of concert with The Hong Kong Philharmonic Orchestra) 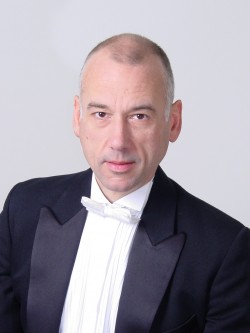 David Drury was born in N.S.W. in 1961 and was educated at Trinity Grammar School, Sydney. In 1984 he graduated from the Sydney Conservatorium of Music with a B.Mus in organ performance and he was also the recipient of the “Vasanta” scholarship for overseas study.

During his three years in England, he studied with the Professor of organ of the Royal Academy of Music, David Sanger, and gained the Associate Diploma in organ, and the Choir-Master Diploma from the Royal College of Organists. In 1987, David became the first and only Australian to win the ‘Tournemire prize’ for improvisation at the St Alban’s International Organ Competition. He has given recitals in Westminster Abbey, St Paul’s and Westminster Cathedrals in London & King’s College Cambridge. In Paris, he has given numerous recitals at Notre Dame and La Madeleine & appeared at the Toulon Festival.

He has toured Canada and many times to the U.S.A. as a recitalist, tutor, accompanist & choral director and has given masterclasses and performed on U.S. radio & television. During 1996 he gave a recital for the Organ Historical Society’s National convention in Philadelphia.

David has appeared at the Sydney Opera House and the Sydney, Melbourne, Brisbane, Adelaide & Hobart Town Halls. He has performed at the Melbourne International Festival of Organ & Harpsichord, the Newcastle Festival, the Barossa Festival & the Festival of Sydney. He broadcasts regularly for the A.B.C. and other radio stations.

David has performed concertos with the Adelaide & West Australian Symphony Orchestras, the Sydney Opera & Ballet Orchestra, Orchestra Victoria & the Hong Kong Philharmonic Orchestra. He also plays with the Sydney Symphony Orchestra when organ is required and has given a number of solo recitals in their ‘Tea & Symphony’ series. He has also performed with the Australian Chamber Orchestra, the Seymour Group, the Song Company, the Sydney Brass Ensemble, the Sydney University Musical Society and the Sydney Philharmonia Choirs. David is also the organist/continuo player with Australian Baroque Brass. He performed in the 2000 Olympic Games opening ceremony and in front of the world leaders at the 2007 APEC concert and at the Youth Festival for World Youth Day 2008.

As a composer, David has a large output of choral music published by ‘Crescendo Music’. He is Director of Music at St. Paul’s College within the University of Sydney. He is also the keyboard player with the progressive band ‘Resonaxis’ and Director of the David Jones Staff Christmas Choir.